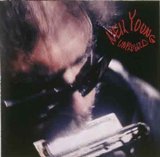 song
album
artist
Oh, hello Mr. Soul, I dropped by to pick up a reason
For the thought that I caught that my head is the event of the season
Why in crowds just a trace of my face could seem so pleasin'
I'll cop out to the change, but a stranger is putting the tease on.

I was down on a frown when the messenger brought me a letter
I was raised by the praise of a fan who said I upset her
Any girl in the world could have easily known me better
She said, You're strange, but don't change, and I let her.

In a while will the smile on my face turn to plaster?
Stick around while the clown who is sick does the trick of disaster
For the race of my head and my face is moving much faster
Is it strange I should change? I don't know, why don't you ask her?
Comments (10)add comment
Great drawing, Calypsus! I like it. It captures his attitude well. Well, this is the finished version of my Neil Young drawing. I have always loved Neil Young's music. He's my favorite ever! So I figured I'd try to draw him. Overall, I am pleased with this drawing. I had never attempted this type of skin texture before and must say it was pretty fun. The hair stumped me a little bit. I know it's not the best but his hair is so messy, it was really hard to recreate in graphite. In the middle of drawing this, I had an idea to add a small figure of Neil at the bottom corner. I sort of stole this idea from Linda Huber's drawing of Bo Bice she did a while back. But the small figure is about 5 inches tall and was done entirely with mechanical pencils. It was very intricate. I hope everyone likes it and thanks for following the WIP.