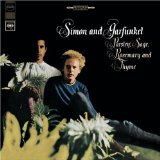 song
album
artist
I been Norman Mailered, Maxwell Taylored.
I been John O'Hara'd, McNamara'd.
I been Rolling Stoned and Beatled till I'm blind.
I been Ayn Randed, nearly branded
Communist, 'cause I'm left-handed.
That's the hand I use, well, never mind!

I been Phil Spectored, resurrected.
I been Lou Adlered, Barry Sadlered.
Well, I paid all the dues I want to pay.
And I learned the truth from Lenny Bruce,
And all my wealth won't buy me health,
So I smoke a pint of tea a day.

I knew a man, his brain was so small,
He couldn't think of nothing at all.
He's not the same as you and me.
He doesn't dig poetry. He's so unhip that
When you say Dylan, he thinks you're talking about Dylan Thomas,
Whoever he was.
The man ain't got no culture,
But it's alright, ma,
Everybody must get stoned.