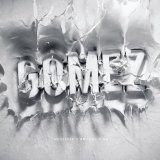 She's the girl of my dreams
If only she could stay inert
See sweet relief
From this total mental mantra(?)

She's gorgeous when she sleeps
Be careful not to wake her

You look so fine to me
You still look so fine to me
Comments (23)add comment
I respect the production and the musicianship.  But if this was written for someone, it should have been sung to them and them only.
Posted 2 years ago by FourFortyEight    [ Reply ]
iam_overlord wrote:
Must be an acquired taste. Like eating larvae from a rotting log.

dmax wrote:
I like these guys more and more.

Posted 10 years ago by sieversfam    [ Reply ]
This album has been a pleasant surprise and one of the best of 2011 so far IMO.  I was kind of shocked to read the review on pitchork.com however: https://pitchfork.com/reviews/albums/15606-whatevers-on-your-mind/

With apologies to Radiohead and My Morning Jacket, Gomez are exactly the kind of band you'd expect to be signed to Dave Matthews' label. They've developed something of a rep as homespun MOR lifers, with a slight cred advantage in that realm on account of a Mercury Prize win and a modest experimental bent. Still, Gomez have never really made the same record twice. Their latest album's ostensible goal is to bring it all back home and celebrate the band's past 15 years, but doing so in one fell swoop just makes it all the more obvious that they've never managed to develop anything resembling an identity. Who are Gomez after all this time? Whoever they think you want them to be.

Though they'd probably be better off rehashing Bring It On's supplicant roots-rock in the current climate, Whatever's on Your Mind begins with a fumbled acoustic strum, and after exactly three seconds of human touch, you get all the elbow grease, brow sweat, and rock'n'roll heart of a dubstep record. Cut Gomez and they bleed Purell. The title track and "Our Goodbye" are Larry Crowne on wax: chipper and conflict-free calls to let go of the burdens of modernity, oozing string dross and unctuous bromides. Even when Gomez are at least sounding like they're operating from the groin, on "Equalize", a Bo Diddley beat is defaced with eroticism run through at least two Babelfish translations ("She's gorgeous when she sleeps/ Be careful not to wake the monster!") and a drum solo way funnier than the one in Wayne's World.

Of course, if Whatever were merely an easygoing and utterly harmless platter of BBQ background music, big deal— they put one out every two years or so. I guess I never noticed it on previous records, but this album's lyrics reach a fascinating fulcrum where laziness can actually become an act of aggression. After about 10 minutes, you're locked into an extremely discomforting magnetism that goes beyond mere music. This is the rubbernecking world of Smack DVDs and YouTube bum fights.

The cover art is a dead ringer for Gang Starr's greatest hits album, yet I don't think Guru was ever this quotable. Co-vocalist Ian Ball projects with unbothered diction from the roof of his mouth, lending a deadpan absurdity worthy of Dipset to lyrical jewels like this one: "Light the match/ Burn me down/ Bite the hand/ Bite the sound/ Where's the good in pushing trains from the rail?/ What's so bad about breaking bread going stale/ You hammer the nail." Meanwhile, Ben Ottewell manages to be the more distinctive singer of the two with a soul-papa bray that recalls Joe Cocker or Eddie Vedder at their most agitated. When he subjects cliché to endurance trials such as "Please hold on to your heart of gold/ While you struggle against the cold/ You keep dragging that heavy load/ Just let it go," it's as transfixing as watching a pitcher in the middle of a perfect game.

Most of this stuff comes from the first half of the record, by the way. But it goes on like that, to the point where you could play a dangerous Whatever's on Your Mind drinking game where you take a shot every time Gomez mix metaphors ("a brick wall's falling apart at the seams") or string together at least two consecutive clichés and render each completely meaningless ("Kill with kindness is what you do/ Flowers in winter bloom"). Seriously, let's all try to stay safe this summer.

I think they may be starting to fall victim to being too hip to like anything that still sounds like music.
Posted 11 years ago by adroc    [ Reply ]
This band is only good when that raspy voice of Ben Ottewell kicks in. Definitely a Robert Palmer/Robby Robertson vibe. The other guy is just too typical for my taste.