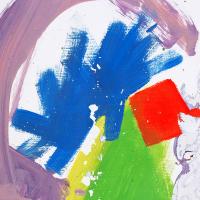 I've found a love to love like no other can

He's found me, my Aslan

Hallelujah, Bovay, Alabama
Marry a man like no other

Hallelujah, Bovay, Alabama
To be a deer in Nara

Hallelujah, Bovay, Alabama
Comments (47)add comment
Good Tune!
Posted 11 months ago by joejennings    [ Reply ]
Never heard of these cats. Moist.
Posted 1 year ago by scoots_mcgoo    [ Reply ]
Amazing band
Posted 1 year ago by orangecraig    [ Reply ]
There are only maybe three artists on RP that send me for the PSD button, and alt-J is the top of the list.  Glad so many people like them, but Bill & Rebecca - I'll just register a 'no' vote on alt-J.  Love love love RP!  Thank you!

Magnificent!
Love the plaintive voices.
Could the meek really inherit the earth?

But not the mineral rights.
Posted 2 years ago by aelfheld    [ Reply ]
Magnificent!
Love the plaintive voices.
Could the meek really inherit the earth?

Me too!
Posted 3 years ago by AbileneTexas    [ Reply ]
One of the best bands to see live.    Not every song is a hit, but it all makes sense when played in concert.
Posted 4 years ago by stunix    [ Reply ]
Hoosfoos wrote:
I hope they break up and stop making music forever.

MrsTom wrote (In reference to Peter Gabriel - Rhythm of the Heat):  Pretentiousness of the highest level. Sounds a bit crap too

Michael_Dean wrote:  Oh glad, I found you, an Expert of Pretentiousness.

Would it not be handy to have a quick reference chart, seeing that we have so many citations of pretentiousness here in the comments section.  Please arrange the following in order of pretentiousness.  If you will do this work, I promise to post the chart every time I see an offense registered.  We can call it the MrsTom Pretentiousness Gradient, MTPG for short.  Not to be confused with Empty Peter Gabriel, of course, THAT'S a whole other chapter, let's just handle these one at a time and in order.  (Was that too Pretentious?).  ah... wait... we were talking about something...... THE LIST ! ! ! I  I'll have it made like a mountain range, with a snow-white pillow for my big fat head, And my heaven will be a big heaven, And I will walk through the front door.  Big time. (I love me!) (Now, I think that WAS pretentious).

The MrsTom Pretentiousness Gradient - M.T.P.G. (Not to be confused with Empty Peter Gabriel, of course).

06.)  Indubitably Pretentious - Pretentiousness Beyond a Reasonable Doubt, you will do the Time for this one.

03.)  Barely Pretentious - This is Pretentiousness that just made it over the line.

01.)  Anomalous Pretentiousness  - Sometimes it's there, sometimes not.  Physicists are baffled, naming it  a non-zero vacuum energy Pretentiousness.  In the special case of vacuum energy, general relativity stipulates that the gravitational field is proportional to ρ+3p (where ρ is the mass-energy density, and p is the Pretentiousness).

aspicer wrote:
This sounds very promising - I'm very curious to hear the full album.  Anyone heard it all yet?

Did you buy the album?  Thoughts?
Posted 6 years ago by westslope    [ Reply ]

Hoosfoos wrote:
I hope they break up and stop making music forever.

Even if/when they break up, the music they've already made would still be around and still be played.  I don't usually enjoy the misery of others, but I have to admit that the thought of you squalling every time Alt-J is played amuses me.
Posted 7 years ago by dwhayslett    [ Reply ]
Love this

Post-prog?  If you had to shove this band's music into a 'category', how would you categorize or succinctly describe it?

If you put as much effort into grammar as you do into being "first", you might be better off.
Posted 7 years ago by Imkirok    [ Reply ]
Nice "flow" from "Cecil Taylor" to this track.
Posted 7 years ago by Baby_M    [ Reply ]
Its a song I find myself lost in on the highway.
The whole cd is a good one, so is the last one.
They did a nice live show at the echo stage, Washington DC, US.

Posted 7 years ago by anika200    [ Reply ]
aspicer wrote:
This sounds very promising - I'm very curious to hear the full album.  Anyone heard it all yet?

Take yourself off to youtube.com and search for Alt-J, and you'll find that some kind soul has uploaded the full album so you can try before you buy.
Posted 7 years ago by fredriley    [ Reply ]
aspicer wrote:
This sounds very promising - I'm very curious to hear the full album.  Anyone heard it all yet?

Yes. Big love for the whole thing.
Posted 7 years ago by AliGator    [ Reply ]
aspicer wrote:
This sounds very promising - I'm very curious to hear the full album.  Anyone heard it all yet?